‘Road safety is everyone’s responsibility’ underpins a collaborative project between the Government of South Australia and the Limestone Coast Local Government Association (LCLGA). Designed to demonstrate the significant benefits of a regionally based officer who works with community road safety groups, local government and the range of stakeholders involved in road safety.

The Regional Community Road Safety Officer provides direction and support to the region’s community road safety groups as well as coordinating regional projects that is expected to reduce the number and severity of crashes.

It is envisaged that the program will not only provide the Government of SA with an important regional link but also the cohesive approach has the potential to be replicated elsewhere.

“Lights on and Live” TV campaign

The LCLGA”s “Lights on and Live” TV campaign asks motorist to turn their head lights on during the day to improve visibility and reduce crashes. It was introduced to the Limestone Coast in 2016 during the Rio Olympics and the AFL Final Series and is repeated at the end of daylight saving. Ali Auld, Regional Community Road Safety Officer reports “That research has shown that driving with lights on during the day reduces crashes.” “ The international research says that putting your lights on during the day will make you between 15% and 17% safer on the road.” “Not only do headlights improve visibility but it has also been shown to reduce dangerous overtaking by oncoming traffic.” “A lot of other countries and carmakers have already embraced the daytime lights concept, and in several countries it has been made mandatory.” This initiative was inspired by the Road Accident Action Group in North Queensland who identified ”Lights on during daylight hours” as one way of reducing trauma on their extensive road networks.

The LCLGA covers 7 Local Government areas in which 3 football leagues operate, Kowree Naracoorte Tatiara in the north, MID SE and the Western Border Football Leagues in the south. The ‘Road Safety Message’ is regularly updated and posted on the popular SA Country Footy website which is viewed by football fans with an interest in South Australian country football. In addition, the details are circulated to regional stakeholders including community road safety groups and once again the 3 football Associations have seen fit to insert it in their Finals programs.

This road safety messaging depicts the sad ratio that exists when it comes to the number of fatal crashes that occur on South Australian country roads when compared to the Adelaide metropolitan area. In 2014, it was around 70%. That is, 7 out of 10 fatalities occurred on roads in rural and regional South Australia. The weekly updates on the Country Footy website are shared with other football leagues with poor road safety records in country South Australia. 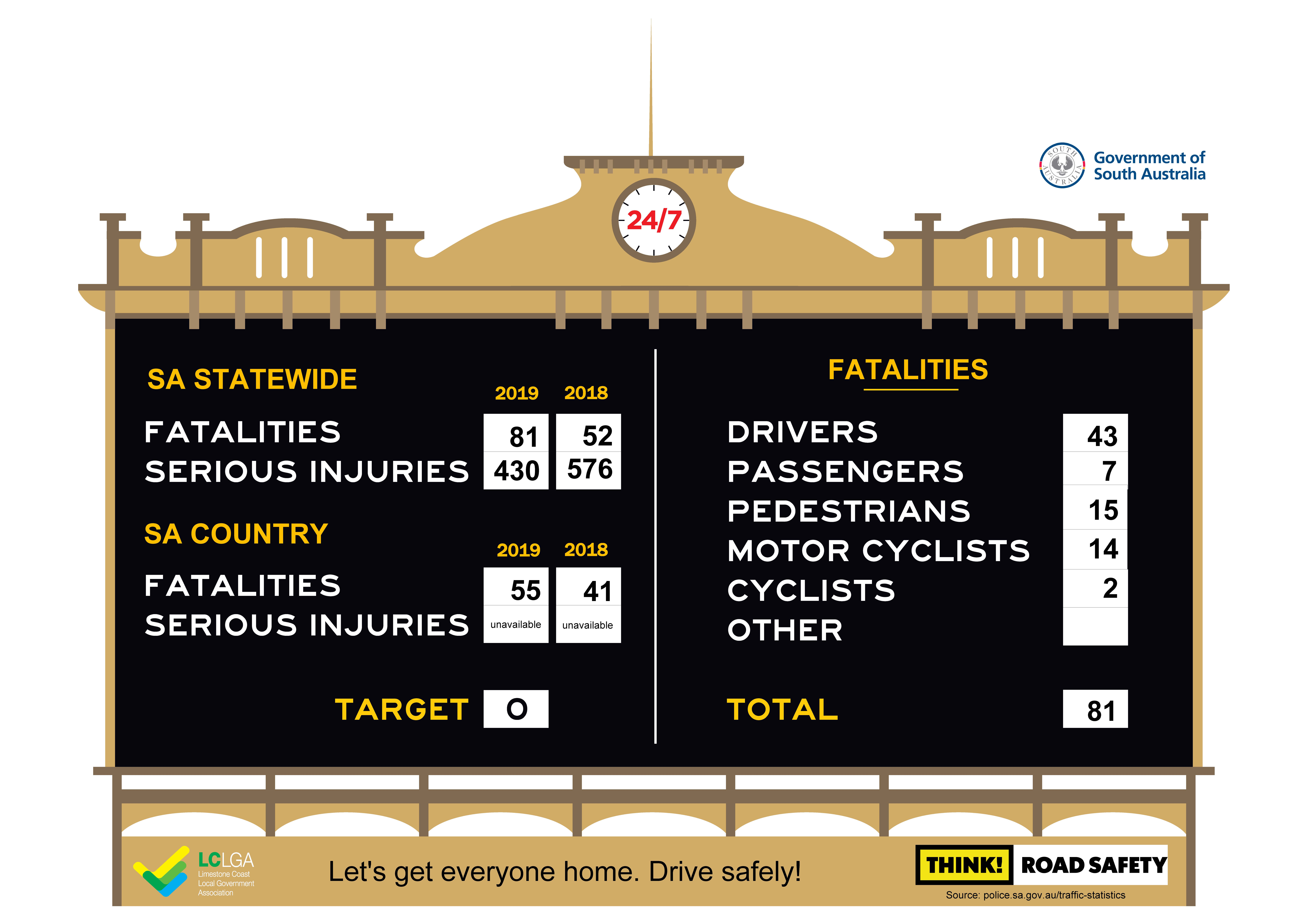 What to do when confronted by a roo!

When it comes to serious crashes in our region, 33% involve vehicles running off the road and hitting a fixed object (trees). One of the key challenges for our region is the high proportion of crashes where vehicles run off the road often in the act of avoiding our native wildlife, especially kangaroos.

In response, a partnership with the Mount Gambier and Districts Road Safety Group and WINTV in the Limestone Coast produce a thirty second educational road safety message on what a driver should do when confronted by a “roo”. The message “Don’t Swerve, Stay Straight and Brake” has been well received and is rerun on an annual basis each summer when the kangaroos present the greatest risk attracted by the green verges on our roads and highways.

SLOW DOWN, Kids Around! Holiday Time

The successful launch of “SLOW DOWN, Kids Around! Holiday Time” road safety message and “Hold My Hand” road safety messages was on the 8th and 9th of December 2016 and is now part of each Limestone Coast Local Council's holiday preparations each school holidays. The Little Blue Dinosaur Foundations Michelle and David McLaughlin of Sydney NSW are the prime movers for this initiative that highlights to drivers, parents and young children of the increased risk associated with children playing on or near roadways and parks with which they are not familiar. Such large, seasonal influxes of tourists has a profoundly positive effect on the local economy but also brings with it, its own set of inherent problems. The Little Blue Dinosaur is proud to be working collaboratively with local government. It is an absolute necessity to improve local roads and develop infrastructure that can cope with the holiday surges in both vehicles and pedestrian traffic. Creating a safer environment for children and families on holiday is a fundamental aim of the Little Blue Dinosaur.

Through the creation and strategic distribution of posters, banners, noticeboard insets and other signage at key tourist hot spots and thoroughfares, the Holiday Time campaign is able to take full effect. The campaign serves as an important reminder to the local community and tourist community about the importance of children’s safety. 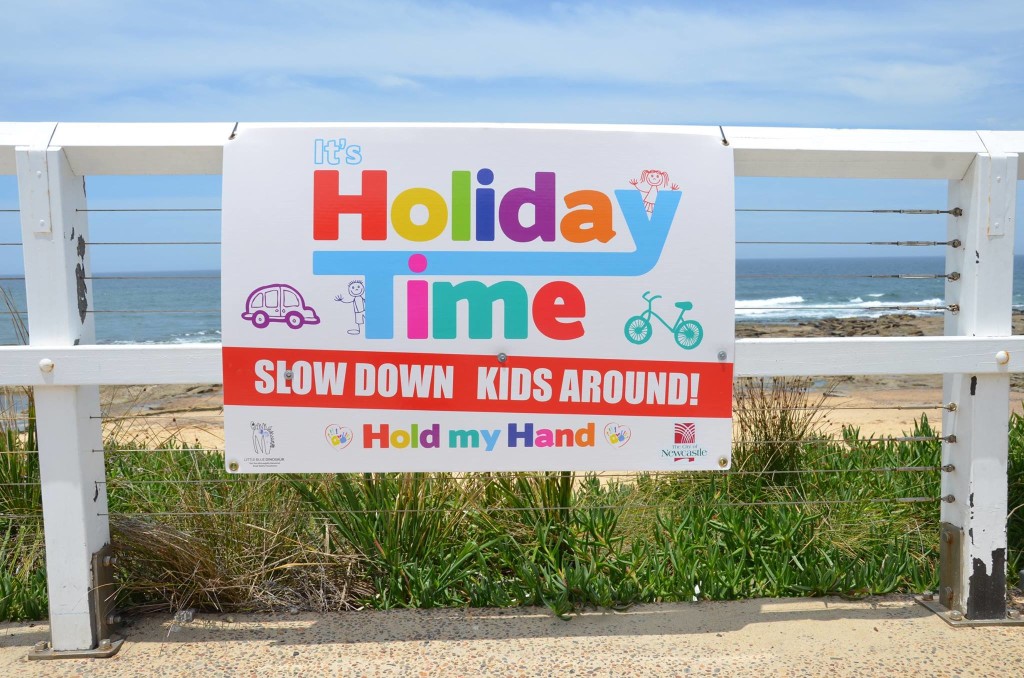 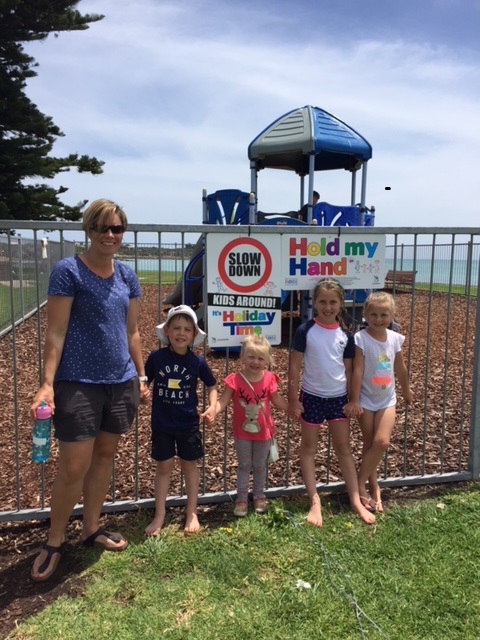 A Bus safety campaign ‘Protect our Treasures, Be Bus Aware’ and “Bus Safety is a shared responsibility’ was introduced in 2019 following the reporting of several near misses. In collaboration with the Government of SA and regional Bus Service Providers. This artwork was provided to councils, education providers and key stakeholders. 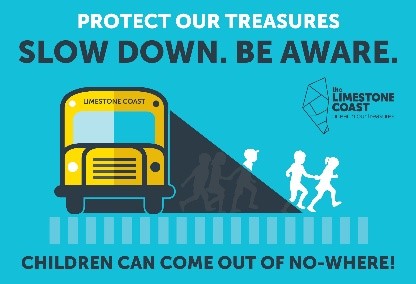 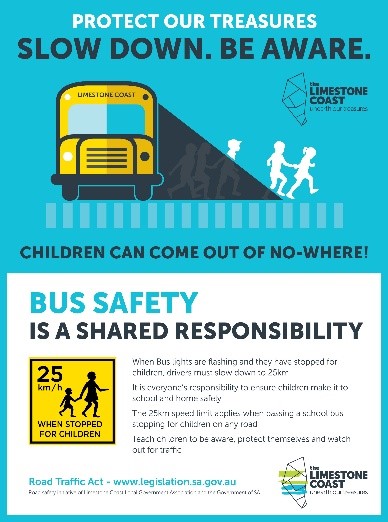